The last two weeks have been very exhausting.

Not only a lot to do at work, but also the survey of my master thesis went online yesterday.
Keep your fingers crossed for me!

Yesterday night, after everything had been organized and set, I finally took some time off to cook :-) Inspired by a friend who invited me to Butter Prawns (unfortunately I'm on vacation) and the urge to eat Italian, I ended up with another crazy combination :o

Sounds weird? It is!

But also incredibly tasty and quickly prepared.
Hope you enjoy it too! 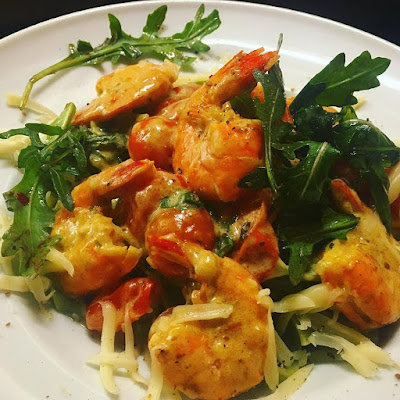 Ingredients for 2:
1 Package (180g or more ;-) ) Tiger King Prawns in the shell (of course, you can also take peeled ones, but in my mind, the ones in the shell are much more tasty and also the texture remains nice and soft after frying, while peeled ones often end up very chewy.
200ml Single Cream
100-150ml Chardonnay
1-2 tsp. Vegetable Stock Powder
2-3 tsp. Prawn Masala Spice (or Fish Masala)
500g Green Tagliatelle
2 Hands of fresh Rucola
1 Hand of fresh Cherry Tomatoes
1 tsp. locust bean flour
some oil for frying or butter
some salt for the pasta
if you like:
some freshly ground pepper
some chili powder
some freshly grated cheese

Preperation:
First begin preparing the pasta, as the sauce won't take too long.

For the sauce heat some oil in a large frying pan.
Add the prawns and fry for about 5 minutes or until they are pink and cooked trough.
Then add the wine, cream and locust bean flour. Mix well and let cook for a moment.
Half the cherry tomatoes and add to the sauce. Season with Masala spices, vegetable stock, chili and pepper. Then take away from the heat and add the Rucola.

Arrange the Pasta and Sauce on two large plates and garnish with grated cheese, if you like. 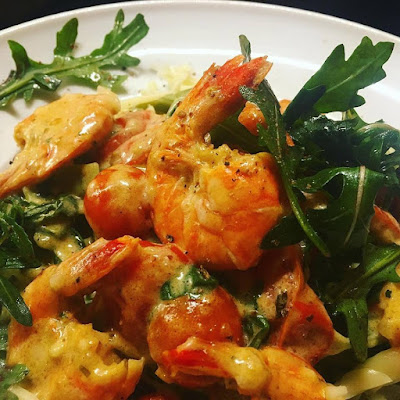 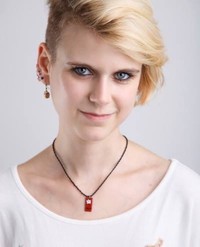 Hello and welcome to my blog! I am "The Cupcake Lady". My goal is to help other people achieve a sustainable and healthy lifestyle. For that I want to inspire with my pictures and recipes. Originally, I only wanted to write about vegan baking recipes. Inspired by foodsharing Hamburg and dumpster diving, I've begun to create and post more creative recipes, using basically rescued food and leftovers, which are mainly vegan or vegetarian. I do not just love cooking and baking, as well as the foodsharing community, but also photography (which I still practice). I'm always looking forward to your feedback and hope you enjoy browsing my blog!